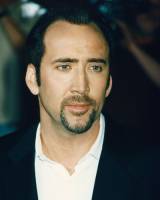 Nicolas Cage has reached a settlement in dueling lawsuits with his former business manager that will keep potentially embarrassing details about his lifestyle and lavish spending out of court.

The 46-year-old Cage sued Samuel J. Levin for $20 million in October, claiming the accountant led him on a path to financial ruin.

Levin "lined his own pockets with several million dollars in business management fees while sending Cage down a path toward financial ruin," he claimed.

But Levin countersued seeking $128,000 in unpaid business management fees, alleging that by the time he was hired, Cage was already on the brink of financial ruin with millions in unpaid income taxes. He said he tried to get the actor to cut on his lavish spending but the Oscar winner didn't listen to his advice.

If the case would have gone to trial, Levin would have provided details of what he believed led Cage to his state of financial ruin.

In his court papers, Levin had said that "he persuaded Cage to sell off more than a dozen of his cars and his comic book collection worth $1.6 million but after 'National Treasure', he was back to his old ways with an epic spending spree."

He said "Cage purchased three mansions at more than $33 million, 22 cars, including nine Rolls Royces, and 47 pieces of artwork in 2007." If that wasn't enough, he also "spent huge sums of money taking his sizable entourage on costly vacations and threw enormous Gatsby-scale parties at his residences."

In fact, Levin said the situation was so bad that Cage needed to earn $30 million a year just to keep up his lifestyle.

As one would expect -- since that was the whole point of a settlement for Cage -- terms of the settlement were not disclosed.