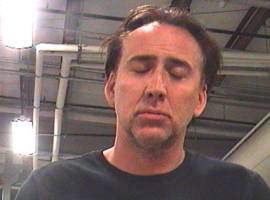 Nicolas Cage, who was arrested for alleged domestic abuse and disturbing the peace after a drunken argument with his wife in New Orleans, is in the clear.

"The New Orleans District Attorney has confirmed that no charges of any kind will be pursued against him," Cage's attorney Harry Rosenberg says in a statement.

"After their investigation, the DAs refused all charges against Nick and the matter has been closed."

The 47-year-old, who is currently filming a movie in the city, was arrested after he grabbed his wife by the upper arm and pulled her on the street.

When an officer inquired what was going on, the drunk actor "began striking vehicles and later attempted to get into a taxi."