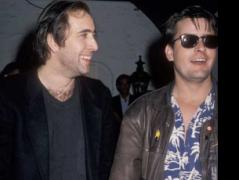 In an appearance with David Letterman last night, Nicolas Cage was asked about Charlie Sheen's claim that it was actually his friend who gave him the idea of using the word 'Goddess' for his girlfriends.

"Well, there is some truth in that, yes," said Cage. "Because we were flying from Los Angeles to San Francisco and I did refer to a flight attend as a Goddess."

"But I had no idea that after 23 years Charlie would make it an international reference point for the women in his life."

Cage said he didn't think much of it because he "had much worse things to be concerned about on that plane."

"I did not know that Charlie had an 8-ball of cocaine wrapped around his ankle nor did he know that half way through the flight that I was going to grab the PA and announce that I was the pilot, I was not feeling well and I was losing control of the aircraft."

Cage went on to describe how upset the pilot was and his meeting with six fully armed police officers.

"The first thing I did was say 'he had nothing to do with it' and I pointed to Charlie. Then I very gingerly, very politely, very delicately, very kindly, talk my way out of going to airport jail."