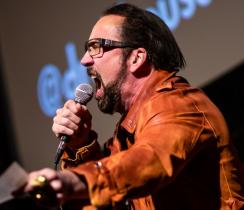 The actor stopped by the festival, now in its fourth year, and kicked off the event by reciting Edgar Allen Poe's 'The Tell-Tale Heart'.

"This is and will always be the greatest day of my life," he said. "I apologize to my unborn future child."

"I'm thrilled to say I made it to CAGED. I've been trying to get here before, never happened, but I was always very touched that this was occurring here in Austin."

"I used to read when I was a child and it gave me all kinds of nightmares," he explained the reading. "I think I was trying to make movies on some level to get to the feelings of some of the more manic performances."

The movies marathon included 'Bangkok Dangerous', 'Joe', 'Bringing Out The Dead', 'Army Of One' and 'Lord Of War'.