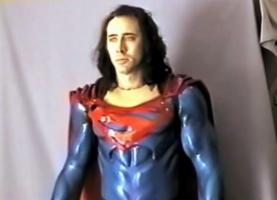 Tim Burton's 'Superman Lives' may never have seen the light of day but test footage from Nicolas Cage's trial of the Superman suit for the film has now surfaced online.

A long haired Cage does stretches in the so-called "lighting suit" that is a slightly shinier yet darker shade of blue from the traditional suit.

Cage was slated to play the superhero in the late 90s project that was eventually scrapped.