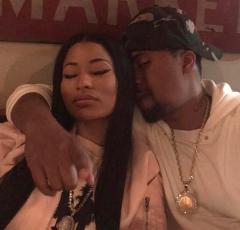 ) played coy about dating Nas but admitted she was getting close to the rapper on 'The Ellen DeGeneres Show'.

After Minaj admitted that Nas was "kind of cute," DeGeneres wondered if they had "sleepovers" yet.

"We have," Minaj smiled. "I go to him. I just thought him coming to me was too forward."

"I wanted to go a year without dating any man. I might make an exception to the rule for him 'cause he's so dope."

Minaj and Nas first sparked dating rumors after she shared a photo of them cozying up a Los Angeles restaurant earlier this month.