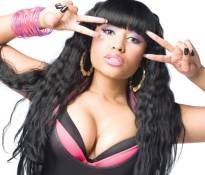 In a statement, Minaj's publicist stated that the singer "regretfully cancelled" her shows, due to be held at the V Festival in the UK over the weekend, "due to strained vocal cords."

"Despite doctor's orders, she performed on a bruised vocal chord in New York City on August 14. As a result, the cord has gotten worse," explains her publicist.

The doctor has now advised her to rest, after an X-ray was taken.

The singer is also on the short list, along with Nick Jonas, to take over the empty judges seats on 'American Idol'. Five-time Grammy winner Mariah Carey (photos

) has already joined the singing competition for a reported $18 million per season.

If Minaj were to join the show, she would be sipping Coke -- who have sponsored the show for a few seasons now -- despite being the face of Pepsi.