Nicki Minaj's Ex: She Treated Me 'Like An Employee, Instead Of Her Man' 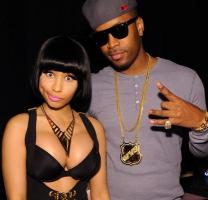 )'s ex-boyfriend Safaree Samuels is speaking out after ending their 11-year relationship.

"I walked away. I'm not going to say I broke up, but I'm the one who walked away," Samuels says in an interview with Power 105.1's 'The Breakfast Club'.

"I packed up my stuff and I left. I just got to the point where the respect wasn't there."

"And it got to the point where I was being treated like an employee, instead of like her man."

"I would never do anything publicly to try to pull her down. Whatever happens between me and her one-on-one is what it is, that's personal. I would never put that out there," he says.

"I could be out here telling a million stories and doing cornball sh-t, but I'm not gonna do that and I never plan on doing that. I just think it's crazy for her to come out now and try to pull me down and try to say I'm corny."

"Don't say, 'Oh, I don't have no talent' because every time it came to writing raps and doing music, it was me, her and a beat. She doesn't do it by herself. It was me and her. Don't discredit me on what I've done for you, that's weak."

"I would never do that for her. All I'm saying is this is something me and her did together. That doesn't take away from what she's done. She's at the top of her league."

This after Minaj talked about their relationship on her new songs and rapped about learning to sleep alone and contemplating overdosing.

"I struggled with 'Do I express these feelings?,'" Minaj explained. "And I decided there's no reason for me to hide. I'm a vulnerable woman, and I'm proud of that."