Nicki Minaj Apologizes For Nazi Imagery In 'Only' Music Video 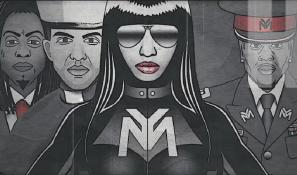 ) is apologizing for the Nazi imagery in her music video for 'Only'.

"I didn't come up with the concept, but I'm very sorry & take full responsibility if it has offended anyone," Minaj says. "I'd never condone Nazism in my art."

"The artist who made the lyric video for 'Only' was influenced by a cartoon on Cartoon Network called 'Metalocalypse' & Sin City," she explains.

The black and white imagery combined with the setting and red flags with imagery that resembled Nazi swastikas.

And to top it off, the video, also featuring Chris Brown, Drake and Lil Wayne, also portrayed Minaj as a cartoon dictator.

Minaj says its producer and the "person in charge" of overseeing it are both Jewish.

You can watch the video below. It goes without saying but be warned of the inappropriate language.