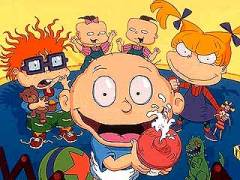 Nickelodeon will be bringing back the '90s.

The network announced on Thursday that it will be adding a new nighttime block of programming on TeenNick called 'The '90s Are All That!'.

"There is an entire generation of young people who literally grew up on these great 1990s series," says TeenNick's Keith Dawkins.

"It's the perfect place to reconnect these shows to their original fans and introduce them to younger viewers for the very first time."

"At the time, we were completely devoted to that audience ages 9, 10, and 11. It was ground-breaking and for the young viewers, a powerful and pivotal time in their lives. Those kids who are now 22, 23 and 24 want to bring that back."

The block will feature a roster of classic Nickelodeon shows such as 'All That', 'Clarissa Explains it All', 'The Adventures of Pete & Pete', 'Rocket Power', 'Rugrats', 'Salute Your Shorts', 'The Amanda Show' and 'Kenan & Kel'.

Nick at Nite will also add 'Friends' and 'Yes, Dear' to its lineup beginning in 2012.