Nick Lachey and Vanessa Minnillo's Wedding To Be Televised On TLC 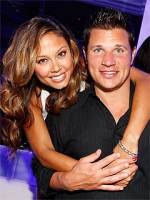 TLC, which apparently used to stand for The Learning Channel, has announced that it will air 'Nick & Vanessa's Dream Wedding', a special to air just weeks after the couple's wedding date, which they are keeping a secret.

Lachey, 37, and Vanessa Minnillo, 30, have been dating since 2006, following Lachey's highly-publicized divorce from Jessica Simpson (photos

). They briefly split in 2009, but it wasn't long before they were back together and got engaged last fall.

"We're lucky to have such passionate and loving fans, and we thought partnering with TLC on this special would be the best way to share the exciting journey we're on with all the people that support us and our relationship," the couple say in a statement.

This isn't the first time Lachey's wedding will be televised. You may recall he and ex-wife Jessica Simpson documented their own wedding and early married life on MTV's 'Newlyweds'.

The special will cover the event from their joint wedding shower, to Minnillo's dress shopping, and the ceremony itself.