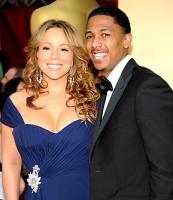 Nick Cannon believes he would be crazy to get married again.

In an interview with DuJour magazine, Cannon compares getting married to a risky endeavour like skydiving. He and Carey split in August 2014 after six years of marriage.

"I feel like marriage isn’t for everyone," says the 'America's Got Talent' host.

"A friend of mine put it the funniest way. He said, 'If you heard that there was a 50/50 chance of living or dying when you jump out of a plane, you probably wouldn't go skydiving.'"

"There’s like a 50/50 chance of a marriage working. If it didn’t work out for you the first time, and you still survived it, you probably shouldn't do it again."

When asked if he would walk down the aisle a second time, he replied, "I highly doubt it."

"How do I say this the right way," he pauses. "Not to say that I was bogged down, because I wasn't by any means, but I like being able to make my own decisions and come and go as I please."