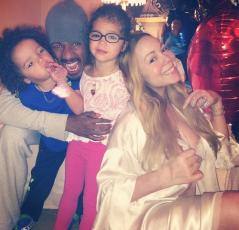 ) may be falling apart.

The 'America's Got Talent' host and Grammy winning singer have also been living separately since June.

"There is trouble in paradise," Cannon admitted to The Insider. "We have been living in separate houses for a few months."

Cannon denied that problems in their relationship were due to infidelity.

"My main focus is my kids," he said of their 3-year-old twins, Moroccan and Monroe.

"We really do feel we are soulmates," Carey said at the time. "I never felt a love like this was in the cards for me."