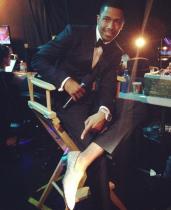 The 'America's Got Talent' finale may have been about the contestants but Nick Cannon made sure he shared the spotlight as he wore diamond shoes wore $2 million on the show.

Made out of 14,000 full-cut round white diamonds set onto white gold, Cannon said on social media: "$2 million shoes -- a million each foot. The most expensive shoes in the world!!"

The shoes were created by jewelry designer Jason Arasheben, founder of Jason of Beverly Hills.

"Not very often do I get a request for the most expensive shoes in the world. When Nick approached me last year, he said he wanted to make history and be so over the top," Arasheben says.

"He wanted to set a new standard in diamonds. 'How can we make the most expensive pair of shoes in the world and make this finale special?'"