New Zealand Says Only 50-50 Chance of Keeping 'The Hobbit' 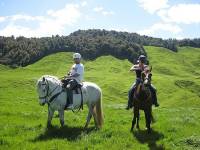 New Zealand's government says it only has a 50-50 chance of keeping production of 'The Hobbit', adding it would not be reeled into a bidding war with other countries for Warner Bros. to relocate the project.

Prime Minister John Key says he isn't ruling out some economic concessions to keep the filming of the US $500 million project in the country, but said it isn't in a position to match offers from other nations.

"We made it quite clear that we can't bridge the gap that is on the table from other countries. It is simply too large and they understand that position," Key told a news conference after talks with studio officials.

"They're out of here if we can't give them the clarity, no question about that," said Key about labor laws and a union boycott. "We have an opportunity to put the pieces back together. But there are no guarantees. I would say, at best, it is still very much 50-50."

Some union members have argued that Warner Bros. is using the industrial dispute, which centered on working conditions and pay, to wrangle a better deal from the government. The dispute began last month when Actors Equity arranged an international boycott of the movies when Jackson refused to hold talks on a union-negotiated agreement on wages and conditions for local actors.

"They are not coming here with a ransom note or trying to put a gun to our head," Key said. "The commercial reality is that the actions of the union have encouraged them to look at other countries and other countries have better deals."

"I think they have burnt a lot of money in the last six weeks or so trying to make a decision about whether they are going to go ahead in New Zealand or go ahead in another location and they've been looking aggressively overseas in quite a few locations. They eventually want to get on with it."

"These are some of the biggest movies Warner Bros. will have ever made so they are trying to take risks away. And the actions of the unions in the last few months spells out large risk to them and they have a fiduciary responsibility to their shareholders to do the best they can to make sure that they can make their movies."

"In the conversations I've had so far I've made it quite clear if it comes to a bidding war, then New Zealand's out, because I don't think that's the right way to run this," he said. "We don't want to be renegotiating with every single production company that comes to New Zealand."

In a studio statement issued last week, Warner Bros said that the action by the acting unions had "forced us to consider other filming locations for the first time."

"The lawyers will sit down and think about industrial policy, we will go away and think about the proposition economically, and we will re-group and over the 24 to 36 hours see whether a deal is possible."

'The Hobbit', a prequel to the 'Lord of the Rings' trilogy, is based on the adventures of Bilbo Baggins. British actor Martin Freeman was confirmed to have landed the lead role last week.