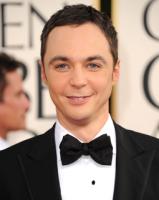 A profile in the New York Times has confirmed that 'The Big Bang Theory' star is gay.

Parsons has never really been in the closet and even appeared at red carpets and awards shows with his partner of ten years by his side.

However, many fans of the show are taking the news as a revelation since Parsons has never really talked about his sexuality.

"The Normal Heart resonated with him on a few levels," the Times' Patrick Healy writes in an article about Parsons' stage work in Broadway revivals of 'The Normal Heart' and,'Harvey'.

"Mr. Parsons is gay and in a 10-year relationship, and working with an ensemble again onstage was like nourishment, he said."

GLBT publication 'Out' notes that Parsons "has lived as a gay man in his private life, but in his professional public life he skirted the issue."

The actor, who is approaching 40, has won two Emmys and a Golden Globe Award for his role as Sheldon Cooper on the hit CBS comedy.