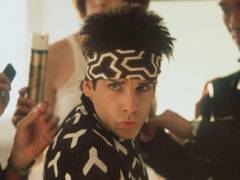 "Depending on the role, the camera angle, the costume, and the hair and makeup, Mr. Stiller, 50, swings between polarities of trollishness and desirability."

"In some movies, he appears dwarfish and deformed with a head that's too big for his body and empty space-alien eyes," he continued.

"He is of average height but looks shorter. And when bulked up, he appears hunched and musclebound."

"But when he fixes those baby blues on the camera and thrusts out his jaw to accentuate his cheekbones, he can pass as handsome: just barely," he attempted a compliment.

Holden explained that Stiller's male comedy may have more to do with his personal thoughts about his looks.

"One reason the character registers so strongly is that Derek suggests Mr. Stiller's personal obsession with his looks," he wrote.

"As it bumps along on a stream of mostly unfunny jokes and awkward celebrity sightings, the movie, directed by Mr. Stiller from a scatterbrained screenplay he wrote with Justin Theroux, Nicholas Stoller, and John Hamburg, rapidly loses its charm and turns into a silly, meaningless pseudo-spy-caper that suggests a discarded remnant of the Austin Powers franchise."