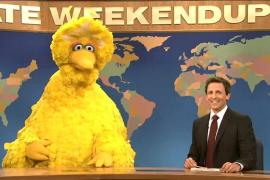 Obama for America, one of the groups hoping to help the president get reelected, is mocking Mitt Romney's promise to cut funding for PBS and 'Sesame Street'.

The ad, that is more in the style of a parody, begins with a serious voiceover taking the names of Bernie Madoff, Ken Lay and Dennis Kozlowski.

"Criminals. Gluttons of greed," it says. "And the evil genius who towered over them? Big Bird."

"Big, yellow and a menace to our economy," it continues. "Mitt Romney knows it's not Wall Street you have to worry about. It's Sesame Street. Mitt Romney: taking on our enemies no matter where they nest."

For its part, Sesame Street says it wants to be kept out of politics and has asked for the ad to be removed.

"Sesame Workshop is a nonpartisan, nonprofit organization and we do not endorse candidates or participate in political campaigns," it says in a statement. "We have approved no campaign ads, and as is our general practice, have requested that the ad be taken down."