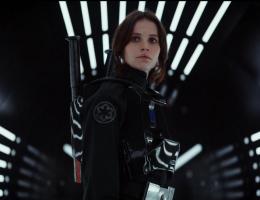 As we get closer to the December release date for 'Rogue One: A Star Wars Story', Lucasfilm continues to trickle out new details about the Gareth Edwards' heist movie.

In fact, in the latest international trailer for the spin-off, fans are treated to a lot of new footage previously not featured in any trailer.

The December 16 release stars Felicity Jones, as the leader of the unlikely heroes that band together on a mission to steal the plans to the Death Star, along with Diego Luna, Ben Mendelsohn, Donnie Yen, Mads Mikkelsen, Alan Tudyk and Forest Whitaker.