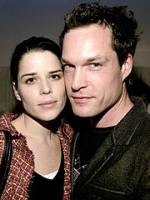 The 37-year-old actress cited irreconcilable differences for the split, according to court papers filed with L.A. County Superior Court.

This was Campbell's second marriage to last three years. They married in Malibu in May 2007 after meeting on the set of the 2001 independent movie, 'Investigating Sex'.

Campbell specifies in her filing that she wants to block the court from awarding Light any spousal support.

The Canadian-born actress was previously married to Jeff Colt for just under three years.