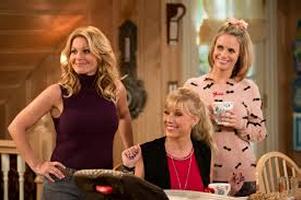 Netflix has released its first trailer for the second season of 'Fuller House' -- and it's coming sooner than you expected with a premiere date of December 9.

The trailer teases what's in store for DJ, Stephanie, Kimmy and the rest of the family as they prepare for the holiday, including a new love interest.

The first season of the 'Full House' revival was a huge success for the streaming service. It's believed during its first month, 'Fuller House' episodes were seen by an average of over 14 million viewers.