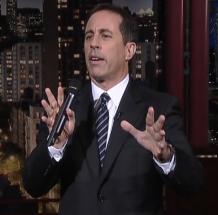 Jerry Seinfeld takes you back to a time before he was a household name as the star and creator of 'Seinfeld', which he created and wrote with Larry David.

The special focuses on his years growing up and early material from his routine. From his time spent on stage at 'The Comic Strip' to his first appearance on 'The Tonight Show' with Johnny Carson.

It's part of the comedian's new deal that includes another stand-up special and his series 'Comedians in Cars Getting Coffee'.