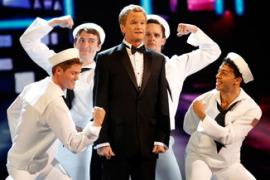 Neil Patrick Harris proved there was no better man for the job as he returned to host the Tony Awards for the fourth time on Sunday night.

Harris kicked off the annual awards show with a song and dance number that promised to be "bigger."

But not before he got in a shot at Shia LaBeouf, who dropped out of Broadway production 'Orphans' at the last minute in February.

"Hi, I'm Neil. I wouldn't be here if someone else hadn't passed on hosting. So special thanks to Shia LaBeouf for this opportunity," he joked.

The opening number also featured a cameo by Mike Tyson and a laugh directed at director Tom Hooper's closeups in 'Les Miserables'.

"Can I have my 'Tom Hooper Les Miz closeup' please?," Harris requested at one point. "On Broadway we don't need extreme closeups to prove we're singing live."

At the end of the elaborate routine, the 'How I Met Your Mother' star quipped: "Well, that's our budget -- good night!"