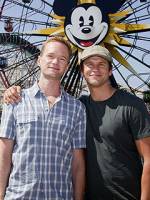 Neil Patrick Harris and his partner, David Burtka, are expecting twins via a surrogate.

"So, get this, David and I are expecting twins this fall," Harris shared on Twitter Saturday morning. "We're super excited, nervous and thrilled."

Harris, 37, and Burtka, a chef and actor who has guest-starred on How I Met Your Mother, have been together for roughly six years.

The Academy of Television Arts and Sciences agreed to give Neil Patrick Harris the latter Emmy nomination this past week after his name was inexplicably missing from the list.

He also recently directed a production of 'Rent' at the Hollywood Bowl.