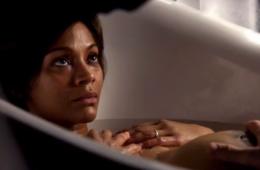 NBC has released an extended first look at its reimagining of 'Rosemary's Baby' with a miniseries event that begins Sunday.

) stars as Rosemary, a young wife who becomes pregnant and suspects her husband and neighbors are planning something strange for the future of her child.

The stars say the desire wasn't to do a retelling of Roman Polanski's film based on the best selling novel but instead to do a reimagining that would bring back the horror element and the psychological terror.

'Rosemary's Baby', this time set in Paris, will air premiere on Sunday, May 11 at 9 PM.

Saldana says the series is about "a woman's undying desire to be a mother and the devil sort of takes advantange of that to basically bring his son on Earth."