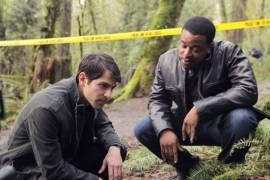 NBC has picked up a full season of freshman drama 'Grimm'.

The fairytale procedural puts a new twist on the stories of the Brothers Grimm. It follows a homicide detective, played by David Giuntoli, in Portland who learns that he is a descendent of a group of hunters known as Grimms, who fight to keep humanity safe from the supernatural creatures of the world.

"We are very pleased to be making a full-season commitment for Grimm," says NBC Chairman Robert Greenblatt.

"This series is turning the traditional procedural drama on its head and is attracting a loyal following for us on Friday nights. We love where it's going creatively and we're excited to deliver more episodes to our audience."

The show has avenged 6.9 million viewers and an enviable 2.3 rating/7 share in the adults 18-49 demographic.

It's the first new drama renewed by NBC this season after its cancellation of 'The Playboy Club' and 'Prime Suspect'. It has already renewed freshman comedies 'Up All Night' and 'Whitney'.