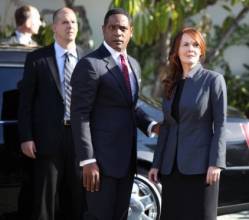 None of the series has posted stellar ratings in a season, in which new shows have struggled to attract viewers. However, they've improved ratings in their time slots and have maintained their core viewers.

'The Event" has averaged a 3.0 rating, 7 share in adults 18-49 and 9.1 million viewers overall. It has generated a 30 percent improvement in the time period versus year-ago in the 18-49 demo and a 47 percent increase in total viewers.

Not to mention the fact that the series was licensed to nearly 200 territories internationally even before its premiere almost made it a shoe-in for a pickup. 'Law & Order: Los Angeles' has averaged numbers just slightly lower than 'The Event'.

Meanwhile, 'Outsourced' has averaged a 3.0 rating, 8 share in adults 18-49 and 6.3 million viewers overall. And while it's total viewers are lower than other networks in the same slot, the show's strength lies the key 18-34 demographic.

"We are pleased with the quality of the three new shows and feel they are an important part of helping to re-build our schedule and our studio pipeline," says NBC's President of Primetime Entertainment, Angela Bromstad. "We believe in these new series and the creative auspices behind them."