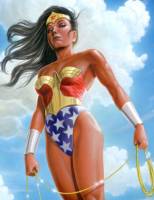 The order comes two weeks after a number of networks, including NBC, initially passed on the project. The network was interested in 'Wonder Woman' but turned it down due to executive reshuffling and its merger with Comcast still in flux.

"I like to think of it as a smart script and I know new NBC programming chief Bob Greenblatt responds to smart material," Kelley tells THR.

"We have her as a real complex woman and not just a superhero."

It would be the second live-action series adaptation of the comic, following the 1970s series, which starred Lynda Carter as the DC Comics superheroine.

The 'Wonder Woman' pilot will have to be approved by NBC this spring before it can receive a season order.