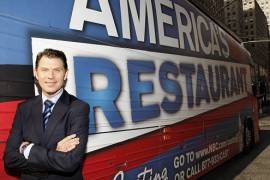 NBC has just released its first preview clip of the upcoming 'America's Next Great Restaurant', in which contestants compete to get backing to turn their restaurant idea into a chain.

The show features celebrity chef Bobby Flay as one of judges who will search for a winning chef to help open a new eatery chain. He will not only serve as a judge but also as a mentor to the contestants.

Australian chef Curtis Stone, Nestle spokesperson Lorena Garcia and Chipotle founder Steve Ells round out the other judges who will invest in the nationwide launch of the chain.