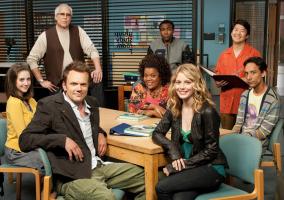 NBC has announced that 'Community' and 'Whitney' will not return on October 19, as previously scheduled.

The network says it's delaying the fall premieres of the shows because it hasn't had a chance to properly market the Friday night comedies.

"Given the success we've had for the past four weeks—including winning the first week of the season in adults 18-49, we've decided to continue to concentrate our promotional strength on our new NBC shows that are scheduled Monday through Wednesday and have therefore decided to hold Community and Whitney from their previously announced premieres of Oct. 19," NBC says in a statement.

NBC also hints that the pair may move to another night if needed.

"Without having to launch these comedies on Friday at this time, we can keep our promotion focused on earlier in the week. Plus, we will have both comedies in our back pocket if we need to make any schedule changes on those nights."

"When we have a better idea of viewing patterns in the next few weeks, we will announce new season premieres of Whitney and Community."

NBC will air Grimm repeats on Friday nights at 8 PM and 9 PM for now.

The last-minute news comes as the 'Community' cast have been busy promoting the show's return, its first season without creator Dan Harmon.