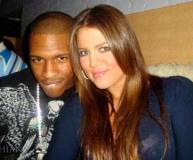 McCants says the 'Kourtney and Khloe Take Miami' episode in which Khloe and her sister claim he cheated on her after they apparently 'hacked' into his voice mail and found suggestive phone messages left by a female fan was staged.

"They made the whole thing up," he tells the New York Post.

McCants explains the sisters did not have his current phone number so they wanted a way to remove him from the show. What's more is he says the two had called it quits in January -- long before the segment was taped.

Meanwhile, the 29-year-old didn't waste any time in finding herself another NBA player. She married LA Lakers' forward Lamar Odom at the end of September, after dating for a month.

Of course, cameras rolled during the ceremony, which is to be broadcast this Sunday.