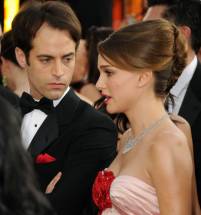 Natalie Portman has welcomed a baby boy with her fiancé, choreographer Benjamin Millepied.

The couple, who met on the set of 'Black Swan' for which Portman won an Oscar, announced their pregnancy and engagement in December.

Millepied, a well-regarded ballet dancer and choreographer, met during the making of the Darren Aronofsky film.

It's been an extraordinary busy and successful year for Portman, who has appeared in 'Thor', 'No Strings Attached' and 'Your Highness' in addition to the psychological thriller.

The 30-year-old actress has hinted that she plans to be "out of the public eye" for a while after her first child.