'MythBusters' Cause Damage After Accidentally Firing Cannonball Into Home 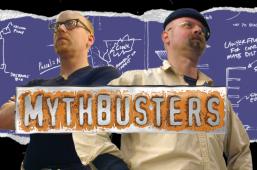 The usually accurate 'Mythbusters' team caused some damage to a suburban neighborhood on Tuesday after misfiring a homemade cannon.

The Discovery Channel show had intended to fire a cannon towards huge containers of water at the Alameda County Sheriff's Department bomb disposal range.

However, the cantaloupe-sized cannonball missed its target

It tore through a cinder-block wall, skipped off a hillside and flew into a neighborhood where it ripped through a bedroom wall, then damaged several tiles on the roof before it fell into the family's minivan on the driveway and shattered the glass.

"It's shocking - anything could have happened," neighborhood resident Jasbir Gill tells the San Francisco Chronicle.

The van and cannonball were both hauled away by police as evidence.

"They are tremendously lucky that it didn't seriously injure or kill somebody."

The Alameda County Sheriff's Department bomb range has been featured on dozens of 'MythBusters' episodes but this is the first such incident.