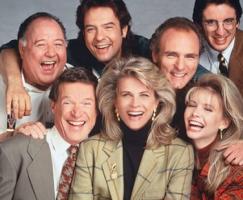 CBS is bringing back 'Murphy Brown' with a 13 episode season for the show's 30th anniversary.

Candice Bergen will reprise her role as Murphy Brown in the revival and the episodes will be produced by the original producers and creator, Diane English.

There's no confirmation whether most of the rest of the cast will return.

CBS teases that the revival will see Murphy Brown "return to a world of cable news, social media, fake news and a very different political and cultural climate."