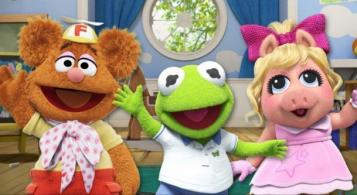 Disney has announced that production has begun on a 'Muppet Babies' reboot.

The series will once again feature the Muppets including Kermit the Frog, Miss Piggy, Fozzie Bear, Gonzo, and Animal as children along with their caretaker Miss Nanny.

But, unlike the original that aired from 1984 to 1991, the series will be computer animated and reimagined for the present day.

"We are proud, and a little bit giddy, to begin production on our new version of the much-loved 'Muppet Babies.' Parents will delight in seeing their favorite Muppets in the mixed animation style they remember from the original series, and kids will be introduced to this warm and zany world made just right for the Disney Junior audience," says Nancy Kanter, executive vice president of Disney Junior Worldwide.

"We hope to engage and delight the nostalgic fans while also entertaining new kids, parents and diverse audiences through heart and humor as only the Muppets can deliver."

The reboot is set to debut on Disney Junior in 2018.