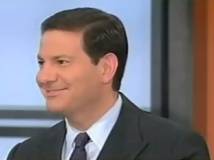 Mark Halperin, MSNBC's senior political analyst, has been suspended by the network for an off-color remark about President Barack Obama on Thursday.

"I thought he was kind of a dick yesterday," Halperin said on 'Morning Joe' during a discussion about Obama's news conference the day before.

Halperin asked host Joe Scarborough if they were broadcasting on a seven-second delay before he made the crude remark. After which the hosts encouraged him to be candid.

However, t producer apparently didn't know where the delay button was and so it didn't get pushed.

"You are supposed to know how to do the job. I would tell you what I think of you," Scarborough addressed producers after the failure to bleep out the word, "but you don't know what button to push."

Halperin, who is also a 'Time' magazine editor at large, apologized shortly after but the damage was done.

"This is an absolute apology. I shouldn't have said it," he said. "I apologize to the president and the viewers who heard me say that."

"It was completely inappropriate and unacceptable. I want to offer a heartfelt and profound apology to the president, to my MSNBC colleagues, and to the viewers."

"My remark was unacceptable, and I deeply regret it."

As it announced the suspension, MSNBC said: "Mark Halperin's comments this morning were completely inappropriate and unacceptable. We apologize to the president, the White House and all of our viewers."

"We strive for a high level of discourse and comments like these have no place on our air."