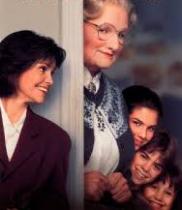 Robin Williams and director Chris Columbus are in talks for a 'Mrs. Doubtfire' sequel.

No plot details have been revealed as the project is still in the early stages. However, already not everyone from the original film is interested in returning.

Mara Wilson, who played the youngest of three children in the film, says she has "no interest."

"For the record, no, I do not have anything to do with the Mrs. Doubtfire sequel, nor will I," she says on Twitter. "I've been in some mediocre movies, but I've never been in a sequel. And I have no interest in being in one now."

"Sequels generally suck unless they were planned as part of a trilogy or series. I think Doubtfire ended where it needed to end. I'm glad I had the chance to be in it, and I'm proud of what we did, but I don't see how we could do it again."

"There are many, many reasons I don't want to be in Mrs. Doubtfire 2. But they haven't even asked me (yet), so no need to worry."

The sequel is being penned by 'Elf' scribe David Berenbaum.