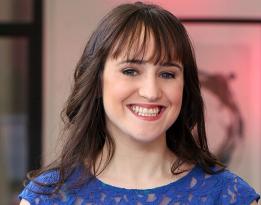 Mara Wilson was one of the rising child stars of the '90s with films like 'Mrs. Doubtfire' and 'Matilda'.

But Wilson says her parents decided she should quit the industry when roles dried up as a teenager because her unconventional look no longer fit Hollywood's standards.

"I've had people tell me, 'The way that you judge yourself, looks-wise, is on this really strange level.' Well, it's because I grew up in Hollywood," the now 29-year-old tells People magazine.

"I had good experiences there, but I always knew there were girls much prettier than I was, and I knew that I was always competing with them. That has followed me my whole life."

"I wasn't getting any parts," she says of when she hit puberty. "Something didn't make sense – at least until I was called for a role in a pilot. I would be auditioning for the 'fat girl.'"

"I realized, 'I don't fit their idea of what a Hollywood actress looks like, so there's no room for me here.' It's hard to come out of that sane and without some serious doubts about yourself."

) land parts while she sat on the sidelines.

"Even though part of me knew I wouldn't go back to film acting, sometimes I wished I'd be in an accident where I'd injure my nose and jaw so I could get reconstruction guilt-free," she admits.

"As I saw it, I had three choices: get cosmetic surgery and go out on auditions for the cute and funny best friend characters, stay the way I was and go out for the meager character actor roles for young women, or accept myself and give up the idea of a Hollywood film acting career for good."

The now 29-year-old lives has been writing theater and comedy in New York since graduating.