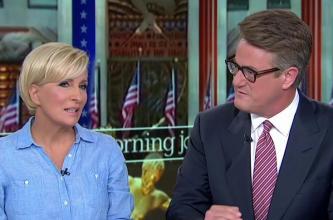 Responding to Donald Trump's vicious attack against them, 'Morning Joe' hosts Joe Scarborough and Mika Brzezinski revealed they had been blackmailed by Donald Trump and The National Enquirer.

"This year, top White House staff members warned that the National Enquirer was planning to publish a negative article about us unless we begged the president to have the story spiked. We ignored their desperate pleas," they wrote almost in passing in an opinion piece for The Washington Post.

However, the two left no doubt they perceived it as "blackmail" when they appeared on their program this morning.

Mika Brzezinski said her teenage children had been harassed by the National Enquirer and they were directly told by three White House aides that a negative story about them would run -- unless they called and apologized for their coverage.

"I had three people at the very top of the administration calling me. And my response was 'Are you kidding me?'. I'm not going to do it. The calls kept coming and coming: 'You need to call, you need to call, please call. Come on Joe just pick up the phone and call him.' It's blackmail."

Scarborough said it was clear that Trump was influencing the Enquirer because he was told the article would be "spiked" if he begged the President.

He also explained Trump boasted to him throughout the campaign about the stories he was able to run in the tabloid against opponents like Ben Carson and Ted Cruz.

Donny Deutsch, who was co-hosting the show on Friday morning, said what many of us were thinking -- that he considered these actions to much more serious than the tweets.

Watch the full appearance below, discussion around this topic is at the 16:30 mark: