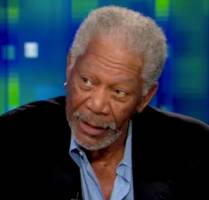 Morgan Freeman is uninjured after his plane blew a tire during takeoff and had to make an emergency landing Saturday at a Mississippi airport.

"Sometimes things don't go as planned and a tire blew on takeoff which caused other problems," Freeman, 78, says in a statement.

Freeman was on his way to Texas for a segment for the series 'The Story of God'.

"But thanks to my excellent pilot Jimmy Hobson we landed safely without a scratch. I cannot say the same about my plane. I appreciate the concern and prayers for our safety."

Tunica Airport's executive director, Eric Konupka, told the local NBC affiliate: "While we were surprised to be alerted of the unplanned landing, I am relieved to report there were no injuries to Mr. Freeman or the pilot."

"Our team is trained for all potential emergencies and our expert ground team at the Tunica Airport was ready for the situation."