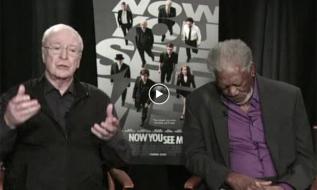 Morgan Freeman knows how to get in a power nap.

The actor fell asleep during an live interview with Michael Caine for 'Now You See Me' on Fox's Seattle affiliate but recovered in time to answer the anchors.

The Oscar winner had his eyes closed for the majority of the interview and at one pointed slumped forward with his head down.

Anchors Bill Wixey and Kaci Aitchison had a sense of humor about the interview.

"Morgan Freeman fell asleep on Kaci Aitchison and I while interviewing him," Bill said on Twitter. "I have that effect on people."

Even Freeman joked about it hours after the interview: "I wasn't actually sleeping. I'm a beta tester for Google Eyelids. I was merely updating my Facebook page."