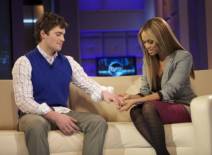 A Georgia woman is suing Tyra Banks for $3 million after her 15-year-old daughter appeared on an episode of Banks' talk show about teen sex addicts, without her permission.

Beverly McClendon, a licensed social worker, says her daughter answered an open call placed on Banks' website last October seeking 'sex addicts'. The show's producers contacted the girl on her cell phone and invited her to appear as a guest.

Jewel Ciera Washington, 15, was then picked up in a limousine and flown to New York, where she was put up in a hotel in advance of her paid appearance -- without her mother's consent.

McClendon says she had virtually no idea about her daughter's appearance until it was too late. She claims the show violated McClendon's right to privacy by putting her daughter, who was a minor, on television without her permission.

She further contends that producers needed to obtain written consent of the Commissioner of Labor in Georgia to pay her daughter, but didn't.

"This show was undoubtedly watched by sexual deviants, perverts and pedophiles alike," she says contends in the lawsuit. She's seeking $3 million in damages, $1 million in compensatory damages and $2 million in punitive damages, from Banks, her producers, and Warner Bros. Entertainment.

She is also trying to get an injunction against any future airings of the episode, which continue to appear in repeats.