Mom: Ariel Winter Is Upset Because I Caught Her In Bed With Boyfriend 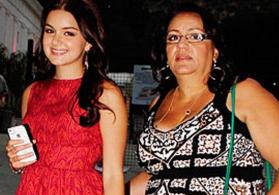 The mother of 'Modern Family' star claims her 14-year-old daughter is upset because she caught her in bed with an 18-year-old and tried to put a stop to it.

But Workman insists she only had her daughter's best interests at heart and even filed a police report against the 18-year-old for "possible unlawful sex with a minor."

She told police her daughter had been dating the boyfriend for five months and that she tried to break them up because of the age difference.

"The informant said the guest bedroom was left wide open when she walked in," the filing states.

"I caught them engaging in behavior that I feel my daughter is too young mentally and physically to understand," Workman says in an interview in which she denies the abuse allegations.

"I filed charges against him because legally he is an adult and if he wants to engage in adult behavior with a minor then he should also be ready to suffer adult consequences for his actions and poor judgment."

A Los Angeles judge allowed Winter to move out of the home and gave temporary guardianship of the star to older sister Shanelle.

But Workman says her older daughter only recently came "out of the woodwork" once news of the growing paychecks for 'Modern Family' made the rounds. The youngsters on the hit comedy now earn $70,000 an episode.

"She has only seen her little sister maybe ten times in the last fourteen years. I love my daughter very much."

"I would never abuse her in anyway, and I have always tried my best to always protect her and do what is right for her. I will not apologize for protecting my daughter, as she means the world to me."