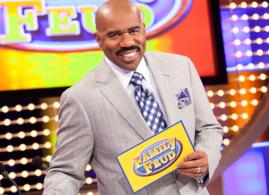 Despite his disastrous blunder at this year's pageant, Miss Universe has officially inviting Steve Harvey to host again next year.

Mark Shapiro, an executive for pageant owner WME-IMG, told the 'Jim Rome Show' that he would "absolutely" want the 'Family Feud' host back even though the comedian crowned the wrong winner on Sunday night.

"He was funny, he was informative, he's high energy, he's got a great following," Shapiro said. "I definitely want him back, and I would hate to see him not come back. He's going to want a shot to redeem himself."

Harvey misread the results card during the pageant's live show and mistakenly announced Miss Colombia as the winner. He had to apologize minutes later as the crown was taken away and then handed to Miss Philippines.

Shapiro brushed off speculation that it was a ploy for ratings, insisting that Harvey was "humiliated."

"The world forgives, the world forgets," Shapiro added. "It could happen to the best of us. He was so well intended, and he's such a good guy, and it was really such a mistake that I hope people don't hold this over him other than for just a good laugh and let it pass."