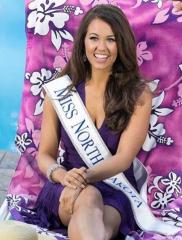 It's the first time a North Dakota contestant has ever been awarded the Miss America crown.

During the first round when asked what was on top of her 'Bucket List', Miss North Dakota smiled and replied that making Miss America's Top 10 was No. 1.

She likely also won over some judges by not holding back when asked a rather tricky question about President Trump's decision to withdraw the United States from the Paris climate accord.

"It's a bad decision," she said. "There is evidence that climate change is existing and whether or not you believe in it, we need to be at that table."

Cara's talent was jazz dancing to 'The Way You Make Me Feel' by Michael Jackson.

The 2017 Miss America, Savvy Shields, passed on the tiara to Mund.

The first runner-up was Miss Missouri Jennifer Davis, the second runner up was Miss New Jersey Kaitlyn Schoeffel and Miss District of Columbia Briana Kinsey was the third runner up.