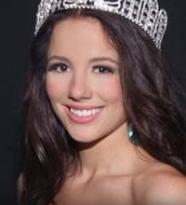 King denied it was her when the video first surfaced even though the woman looks and sounds exactly like her and says she's been known to compete in beauty pageants.

The video (uncensored photos) was shot sometime in June 2012, four months before she was crowned Miss Delaware Teen USA.

At the beginning of the video, the girl in the purple patterned dress sits on a bed and answers questions for the man behind the camera who asks her when she turned eighteen.

"Three months ago, in March," she replies. King's birthday is in March.