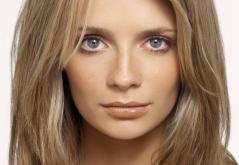 ) was hospitalized on Thursday after police were called to her home.

A LA County Sheriff's Department spokesman says the actress was voluntarily transported to hospital after officers responded to a disturbance call.

TMZ reports that friends of the actress became concerned because she was exhibiting "bizarre behavior."

While only wearing a dress shirt and tie, Barton was "hanging over her backyard fence and rambling about her mom being a witch, the world shattering."

"At one point she fell backward off the fence and said, 'Oh my God, it's over! I feel it, and it's angry!'"

Sheriff's deputies had reportedly responded to a call for a jumper or possible overdose.

Fans will remember 'The OC' star was placed on an involuntary psychiatric hold in 2009 after she threatened suicide. This time she was voluntary transported to a hospital for an evaluation.