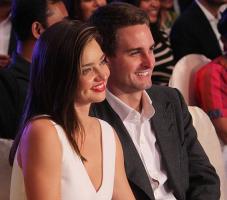 The Victoria's Secret Angel and the billionaire co-founder of Snapchat first met in 2014 and began dating in the summer of 2015.

This will be the first marriage for the 26-year-old Spiegel and the second for Kerr, 33, who's shares 5-year-old son Flynn with ex-husband Orlando Bloom.

After her split from Bloom, Kerr was briefly linked to Australian business tycoon James Packer -- who is now engaged to Mariah Carey (photos

Forbes estimates that Spiegel is worth $2.1 billion while the Australian model's net worth is said to be around $40 million.

In 'The Edit's January issue, Kerr said the younger Spiegel "acts like he's 50."

"He's not out partying. He goes to work... He comes home. We don't go out. We'd rather be at home and have dinner, go to bed early."