Miranda Kerr: I 'Fell Into A Really Bad Depression' After Orlando Bloom Split 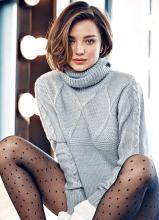 ) opens up about her split from Orlando Bloom in an interview with Elle Canada.

"When Orlando and I separated, I actually fell into a really bad depression," says the Australian supermodel.

"I never understood the depth of that feeling or the reality of that because I was naturally a very happy person."

Kerr, who was married to the Bloom for three years, says she learned that "every thought you have affects your reality and only you have control of your mind."

She's also getting used to co-parenting her 5-year-old son, Flynn, with her ex.