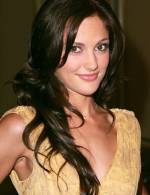 Esquire has named Minka Kelly the 'Sexiest Woman Alive' in its November issue.

It's been a good year for the former 'Friday Night Lights' actress and current girlfriend of New York Yankees star Derek Jeter.

"I think it's the most exciting birthday I think I've ever had," the 30-year-old tells the mag. "I'm so excited to be a woman. Done with the twenties."

And while she bares her toned abs for the cover, Minka adds "I'm confident in my skin, and I'm cool with my flaws and all that stuff."

"It just feels nice to be at peace with yourself. I think my thirtieth birthday gave me permission to have all that."

Check out Minka Kelly's photos and video from the issue below:

See video of the shoot below (we've already included the best shots above):